The Cartwright Gardens Mystery (1924) begins, promisingly, with a suspicious death, witnessed by a young male lodger named Albert Jennison, who is leaning outside his window, which faces the street the novel marks down firmly in its title. In setting the scene for this murder, the narrator elaborates with substantial detail upon the literary geographical territory:

Cartwright Gardens lies in the far east corner of Bloomsbury, somewhat south of the dreary Euston Road, and somewhat north of the still drearier quarter that fringes on the western confines of Clerkenwell. Whoever knows nothing of it and goes thither on a voyage of discovery must not expect what the name, taken literally, would seem to suggest – here are neither bushes not brakes, flowers nor fruits. What is here is a drab and dismal crescent of houses, fronted by an enclosure wherein soot and grime descend on the London plane tree and the London turf; an oasis, perhaps, in the surrounding wilderness of shabby streets, but only, as things go, for the brave sparrow and his restless stalker, the lodging-house cat.[1]

In foregrounding spatiality, both in the title and the text’s opening set-piece, ‘Golden Age’ popular detective fiction writer J. S. Fletcher was partly following a formula that had proved successful for him in the past. He had come to fame in the previous decade with The Middle Temple Murder (1918) and had very recently published The Charing Cross Mystery (1923), both of which novels made explicit use of recognisable metropolitan locations in order to accentuate a sense of topicality and urgency. In this practice he was, of course, hardly original, as the prominent use of real London places in detective fiction had become common by this point in the development of the genre and can be traced back at least as far as that pioneering pot-boiler, The Notting Hill Mystery (1862-3). Part of the repertoire of tricks writers could employ to achieve the ‘reality effect’ Roland Barthes has discussed, branding one’s fiction with an actual residential address was a way of linking it in the reader’s imagination with the crime columns of newspapers, which similarly christened unsolved crimes with recourse to the Post Office Directory. 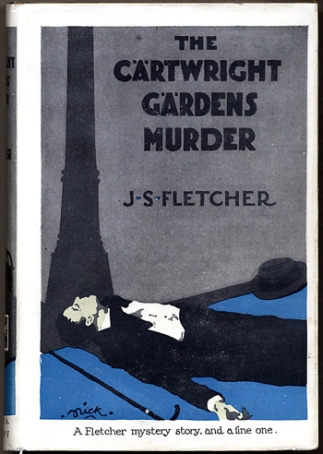 What is curious and notable, however, about the book’s prominent geography is the fact that the very street spotlighted in Fletcher’s novel had featured in those newspaper columns, albeit fifty years earlier. In 1878, it had played host to the shocking homicide of an elderly widow, Rachel Samuel. An unsolved crime sensation, the case was known popularly with reference to the then current name of the street as the ‘Burton Crescent murder’. The renaming of Burton Crescent, which was almost certainly prosecuted partly in response to the reputational corrosion the locality sustained because of the unsolved crime with which it was associated, happened as late as 1908. While the bricks and mortar of the street itself had been laid down between 1809 and 1820 by the speculative master builder James Burton (after whom it would take its original name), its latter designation  ‘Cartwright Gardens’ was only sixteen years old when the novel appeared.

When we pay attention to the novel’s intertextuality with the geography of other earlier and more famous texts, the old street name appears to have been intentionally (if subtly) invoked. In Anthony Trollope’s The Small House at Allington (1864), the ‘hobbledehoy’ hero of that novel Johnny Eames also rents a room in a boarding house on Burton Crescent (as it was then called). Like Albert Jennison, Eames is in his early twenties and a fellow of imaginative or even poetic propensities (a ‘builder of castles in the air’). Both leave their lodgings in this street behind and move, initially, to the Great Western Hotel, in Paddington. That detail of residential trajectory is surely too precise to be unmeaning coincidence. It suggests Fletcher was aware of Trollope’s novel (and of the old street name) when writing his own text set in the same geographical location.

A number of theorists of space have seen something rather fascinating and complex in place names. Georg Simmel finds the shift from names to numbers in the modern city a phenomenon that illustrates the move towards ever greater efficiency (and consequent alienation) that occurs in industrialised modernity.[2] Walter Benjamin[3] and Michel de Certeau, meanwhile, are both interested in what escapes that shift away from messy particularity. The former thinks about the poetic ‘magic’ that occurs in the chance encounter between two names formed by a street corner, while the latter explores how the imposed significances inscribed by planners on the streets they design or rename become broken up, subverted, and rewritten by the everyday poetic practices of talkers and walkers.[4] By ghoulishly reviving the memory of a repressed past by staging another murder there, and by pointing the (careful and thorough) reader, through allusion to local literary history, to the old tainted street name, Fletcher’s novel might be seen to enact another related kind of subversive local practice to those de Certeau envisions. Rather than opposing a top-down scripturality with an alternative semantics of street-level resistance that is carried through oral and spatial manoeuvres, The Cartwright Gardens Mystery coaxes out the spectre of the old name from beneath the new through the play of submerged intertextuality and genre.