In my work, I’m pretty committed to trying to get my research ‘out there’ as much as possible, and have experimented with a fair few different kinds of dissemination in the past few years, including doing walking tours about William Morris, speaking to a residents association for the Brunswick Square and Brunswick Centre neighbourhood about its locality literary history, recording podcasts about the writer as resident, and, of course, this blog (a relatively new medium for me). Of all the varieties of what is tediously reified by managerial types as ‘public engagement’ I’ve been involved in, certainly the oddest, most nerve-wracking and also most enjoyable has been academic stand-up comedy, an innovation Steve Cross at UCL introduced me to, through its pretty awesome Bright Club. Having previously done routines for them about nineteenth-century Bloomsbury (I hear you yawn!) and the houses of parliament burning down (more exciting, yes?), they’ve asked me to participate in one event that I just couldn’t afford to turn down. This Sunday afternoon, I’ll be joining a cross-disciplinary bunch of other academics that will (hopefully) amuse and inform the public about intoxicants. Anyone that knows me even slightly will agree that, for once, at least, I can claim to be expert on something….

I’ve chosen to do a talk on the use and cultural representation of opioids in the nineteenth century, a topic I’ve become interested in largely through my research into the poetry of George Crabbe, a clergyman writer who was also (perhaps not coincidentally), addicted to laudanum for much of his life. Laudanum, that ubiquitous cure-all made of alcohol and opium, was extremely widely available throughout the Romantic and Victorian periods. Crabbe, who is best known for writing ‘Peter Grimes’ (1810), a poem set in Aldeburgh which Benjamin Britten would make famous through his glorious opera of the same name, was by no means alone in forming a life-long habit after being prescribed the medicine for a relatively minor ailment. Another writer a couple of generations after him, Wilkie Collins also became hooked on the stuff, and wrote it into the plots of some of his sensation novels, including most famously, The Moonstone (1868). One of his earlier novels, which was serialised in Dickens’s All the Year Round between March 1862 and the beginning of 1863, No Name also features a protracted scene that revolves around this potentially lethal but also very commonplace nineteenth century intoxicant. The thing that really intrigues me about this novel’s use of laudanum is – as so often in my work – the matter of space and geography. For where does Collins choose to set the novel’s thrilling laudanum scene but Aldeburgh.

I haven’t yet been able to find out whether Collins did or could have known about Crabbe’s addiction – haven’t had time to track down the relevant books yet, sorry! But what we might call a kind of intertextuality of literary geography always jumps out at me when I read texts that inscribe a new story on an already culturally mediated site: so often, when writers engage with a place in their fiction, they call up the memory of other contemporary or previous writers that have become associated with that place in their own work. Much of my research into nineteenth-century Bloomsbury involved tracking down these shadowy references to the cultural constructions of the place from the literature of a few decades back, as for instance does my chapter about the intertextual relation of the geography of Thackeray’s Vanity Fair to its silver fork antecedents. When I read this novel by Collins, the lengthy section set in Aldeburgh kept reminding me of passages I knew from Crabbe’s masterpiece The Borough (1810), of which ‘Peter Grimes’ forms a part. When I came across the scene in which the mentally disturbed heroine Magdalen Vanstone contemplates suicide by laudanum overdose, it appeared to directly invoke the spirit of Crabbe, a poet whose tragic verse includes non-heroic ‘self-murder’ with notable and unusual frequency. 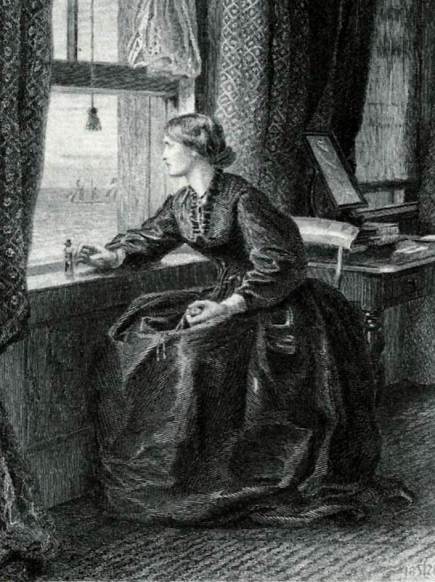 Leaving that unsolved question of the intentionality or otherwise of the spatial intertexuality between Crabbe and Collins, in my stand-up routine I’m going to play it for laughs. Contemplated suicide, should, of course, be no laughing matter, and in the case of No Name this is, in one sense, very much the case. Magdalen’s long night of toying with killing herself is a highly powerful and emotional piece of writing, which can be, even now, very moving. But, as so often happens with Victorian fiction, there is an element of farce that lies behind the sentiment. (One is reminded of Oscar Wilde’s famous quip about Little Nell’s exit stage right.) In what seems to me, when one reads it in the cold light of one’s office, a preposterous plot scenario, Magdalen decides to give her fate up to the gods by playing ‘eeny-miny-mo’ with the ships on the sea that pass by her window within a strictly timed thirty minutes. Psychologically acute or absurdly contrived, bearing in mind, we know all along Collins can’t afford to lose his beautiful heroine: you decide!

The sea showed it to her. Dimly distinguishable through the mist, she saw a little fleet of coasting-vessels slowly drifting toward the house, all following the same direction with the favoring set of the tide. In half an hour—perhaps in less—the fleet would have passed her window. The hands of her watch pointed to four o’clock. She seated herself close at the side of the window, with her back toward the quarter from which the vessels were drifting down on her—with the poison placed on the window-sill and the watch on her lap. For one half-hour to come she determined to wait there and count the vessels as they went by. If in that time an even number passed her, the sign given should be a sign to live. If the uneven number prevailed, the end should be Death.

With that final resolution, she rested her head against the window and waited for the ships to pass.

The first came, high, dark and near in the mist, gliding silently over the silent sea. An interval—and the second followed, with the third close after it. Another interval, longer and longer drawn out—and nothing passed. She looked at her watch. Twelve minutes, and three ships.           Three.

She looked at her watch again. Nineteen minutes, and five ships. Twenty minutes. Twenty-one, two, three—and no sixth vessel. Twenty-four, and the sixth came by. Twenty-five, twenty-six, twenty-seven, twenty-eight, and the next uneven number—the fatal Seven—glided into view.         Two minutes to the end of the half-hour. And seven ships.

Twenty-nine, and nothing followed in the wake of the seventh ship. The minute-hand of the watch moved on half-way to thirty, and still the white heaving sea was a misty blank. Without moving her head from the window, she took the poison in one hand, and raised the watch in the other. As the quick seconds counted each other out, her eyes, as quick as they, looked from the watch to the sea, from the sea to the watch—looked for the last time at the sea—and saw the EIGHTH ship.

She never moved, she never spoke. The death of thought, the death of feeling, seemed to have come to her already. She put back the poison mechanically on the ledge of the window and watched, as in a dream, the ship gliding smoothly on its silent way—gliding till it melted dimly into shadow—gliding till it was lost in the mist.

The strain on her mind relaxed when the Messenger of Life had passed from her sight.

“Providence?” she whispered faintly to herself. “Or chance?”

Her eyes closed, and her head fell back. When the sense of life returned to her, the morning sun was warm on her face—the blue heaven looked down on her—and the sea was a sea of gold.

She fell on her knees at the window and burst into tears.