At the recent BAVS (British Association of Victorian Studies) conference, whose theme was ‘Victorian Sustainability’, I addressed the participation of nineteenth-century fiction in the discourse upon the unplanned horizontal expansion of cities, which led to the coining, in 1955 (according to OED) of the now dead metaphor of ‘sprawl’. Over the course of the Victorian period, the rhetoric through which writers rendered urban sprawl changes, the construction of new suburban houses becoming increasingly construed in terms of natural reproduction, incubation, and germination, whereas it had been largely described before that by way of the analogy of war, conquest or empire. The key decade for this transition appears to have been the 1860s, when both Dickens and Collins, who had written about the subject in earlier novels, newly engage with sprawl in a way that is suggestive of biological kinds of growth and multiplication, and not simply social (and therefore reversible) kinds. In the larger version of the paper, I show how this shift towards the biological becomes more pronounced towards the end of the century, and argue that when we engage with the idea of ‘sprawl’, we should be aware both of the complex cultural historical roots of the metaphor and of the negative implications for the environmental movement of using a concept with its ‘roots’ (ahem) in biologistic conceptions. 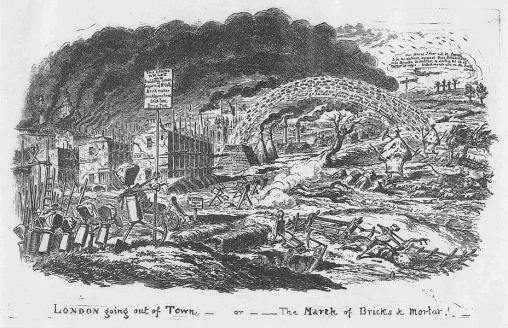 Whereas, from the 1830s to the 1850s, the growth of the city was frequently imagined in terms of war or imperial takeover, from the 1860s on, more biological images of organic change creep into sprawl fiction, through gestures to natural reproduction and to the figure of the child. ‘The March of Bricks and Mortar’ (1829), by Dickens’s great illustrator Cruikshank, was influential in establishing an association of urban sprawl with a kind of battle, or conquest, and a number of articles and pieces from 30s and 40s make similar kinds of analogy; even as late as Bulwer Lytton’s What Will He Do With It? published in 1859, we can see the shadow of the battle idea playing itself out, in its description of new North London suburbia, where each ‘encamped’ tenement is ‘tortured into contrast with’ its neighbours, most of whom (Pharoahs, Spartan, Normans, Goths) are past warmongers.

…one of those new dwellings which yearly spring up north of the Regent’s Park [formerly in Middlesex] – dwellings that, attesting the eccentricity of the national character, task the fancy of the architect and the gravity of the beholder – each tenement so tortured into contrast with the other, that, on one little rood of ground, all ages seemed blended, and all races encamped. No. 1 is an Egyptian tomb! – Pharaohs may repose there! No. 2 is a Swiss chalet – William Tell may be shooting in its garden! Lo! The severity of Doric columns – Sparta is before you! Behold that Gothic porch – you are rapt to the Norman days! Ha! those Elizabethan mullions – Sidney and Raleigh, rise again!

Dickens and Collins, both employ the conquest idea, broadly conceived, in their depictions of urban sprawl from this earlier Victorian period; Dombey and Son (1847) and Hide and Seek (1854), both clearly reference Cruikshank’s picture, the former writing ‘giant forms of cranes, and tripods straddling into nothing’ into its famous depiction of a building site, and the latter doing the war metaphor to death

Alexander’s armies were great makers of conquests…but the modern Guerilla regiments of the hod, the trowel, and the brick-kiln, are the greatest conquerors of all…What dismantled castle, with the enemy’s flag flying over its crumbling walls, ever looked so utterly forlorn as a poor field-fortress of nature, imprisoned on all sides by the walled camp of the enemy, and degraded by a hostile banner of pole and board, with the conqueror’s device inscribed on it–“THIS GROUND TO BE LET ON BUILDING LEASES?”

In the 1860s, both writers return to the subject of the city under construction, and in the rhetoric of both, something has changed. In the Dickens of Our Mutual Friend (1865), an ‘unfinished street already in ruins’, witnessed briefly on the way to Bradley Headstone’s school, becomes juxtaposed with the half comic, half alarming, presence of a ‘child of particularly incoherent mind’, who halts his already incomprehensible construction of what is represented here as a ‘toy neighbourhood’ half way through by violently kicking the table and falling asleep:

The schools were newly built, and there were so many like them all over the country, that one might have thought the whole were but one restless edifice with the locomotive gift of Aladdin’s palace. They were in a neighbourhood which looked like a toy neighbourhood taken in blocks out of a box by a child of particularly incoherent mind, and set up anyhow; here, one side of a new street; there, a large solitary public-house, facing nowhere; here, another unfinished street already in ruins; there, a church; here, an immense new warehouse; there, a dilapidated old country villa: then, a medley of black ditch, sparkling cucumber-frame, rank field, richly cultivated kitchen-garden, brick viaduct, arch-spanned canal, and disorder of frowziness and fog. As if the child had given the table a kick and gone to sleep.

In Armadale (1866), meanwhile, Collins uses building plots for a scene of classic suspense, which invokes not a sense of visible brutish aggression but instead a pervasive sense of decay.

The streets dwindled feebly….into smaller and smaller houses, and died away on the barren open ground into an atrophy of skeleton cottages. Builders hereabouts appeared to have universally abandoned their work in the first stage of creation. Landowners set up poles on lost patches of ground; and, plaintively advertising that they were to be let for building, raised sickly little crops meanwhile, in despair of finding a purchaser to deal with.

Here the setting is ostensibly the emergent suburbs of a provincial town in East Norfolk, but its description links it with the parallel passages about London in Collins’s other work. Compared both to dead foetuses and rotten bones, this sprawl passage sets the scene for Mr Bashwood’s nervous encounter with Miss Gwilt, and hints of the narrative’s covert interest, elsewhere in the novel, in other kinds of projects ‘abandoned in the first stage of creation’, through its inclusion of what most critics have assumed to be an abortion doctor. The Law and the Lady (1875) likewise associates deserted building plots with a more organic form of stalling or interruption, when it takes the reader for the first time to the house of the grotesque Misserimus Dexter, who lives in a ‘great northern suburb of London’ that is still under construction:

….in the dim light, I saw the half-completed foundations of new houses in their first stage of existence.

There is a foreboding in the writing of this scene of a different register to the earlier novels. The jocular satire, lengthy lists and elaborate military conceits of Dickens, Bulwer, and the early Collins, have been replaced by the pan-around camera view, noting with a sense of wary distance all that is in sight. The fictional technique anticipates the language of cinema, and the uneasy glance at those ‘gaunt scaffolding poles’ reminds one of that moment in Ridley Scott’s film Alien (1979) when the protagonist Kane first surveys all those slimy eggs waiting to be hatched. Similar to the worryingly quiet bits of other horror films, the horror of this building plot is that of insidiousness, of the gradual and therefore virtually unnoticeable creep. When one looks at it square in the face, it appears so dead, so static, so bereft of animate industry, being ‘waste ground’, with all that phrase’s connotations of oblivion, futility, lack. Come back another day, however, and it will have been transformed into a ‘bran-new’ part of suburbia. The building plot, meanwhile, with its messy paraphernalia of scaffolding and scattered bits of un-built houses, will have sidestepped into the next field.